Kattia Rojas grew up in San Jose, Costa Rica, in what she describes as a traditional Latin family. She loved to watch as her mother cooked for the family and as her grandmother cooked for guests at the coastal inn that she and Kattia’s grandfather ran. Kattia was encouraged to pursue her studies rather than to spend too much time in the kitchen and it wasn’t until years later that she would blend these interests, with the creation of Buen Provecho Restaurant, in Albuquerque, New Mexico.

That blending began in 2000 when Kattia decided that, in order to move forward with her marketing career and to work for a trans-national company, she had to learn English. She had several family members living in Sussex County, New Jersey, and soon found herself living there for what she thought would be one month. One month turned into several and then into a year. As her English improved, she ended up working for her uncle’s company where she met her husband, William, who was also from Costa Rica. 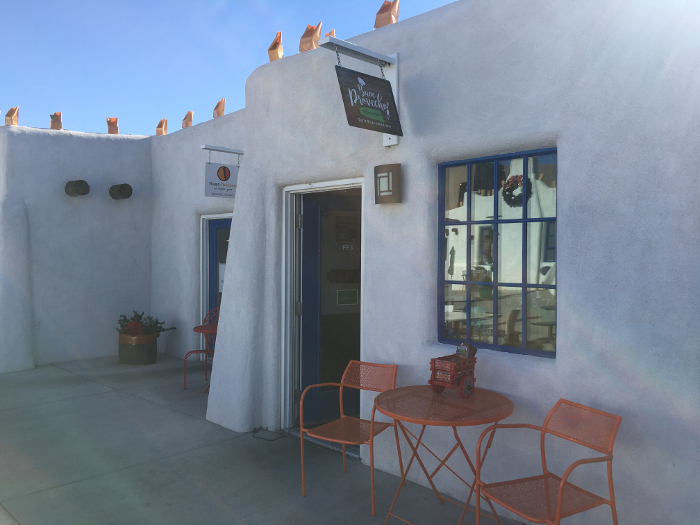 When an opportunity to move West to manage a ranch in Pagosa Springs, Colorado, presented itself, Kattia and William decided to take it. It was there, in Southern Colorado, that Kattia remembered her love of cooking. The ranch’s owners were an elderly couple who enjoyed socializing and Kattia began making desserts and dishes for them to take to events. It was during this period that Kattia realized cooking came naturally to her and that, more importantly, she enjoyed it. “I should take this seriously,” she thought.

Over time, Kattia and William became full-time assistants to the owners. They spent summers in Pagosa Springs and the rest of the year in Albuquerque, New Mexico, where their bosses encouraged them to go back to school. In 2011 Kattia enrolled in the baking program at Central New Mexico Community College (CNM)  and then in the culinary arts program. As a student, she began selling her pastries and desserts to restaurants around Albuquerque. She graduated with a degree in baking and soon began an internship with The Streetfood Institute (streetfoodinstitute.org). The internship helped turn Kattia’s dream into a business. In addition to offering entrepreneurial classes and support, The Streetfood Institute helped her to find a commercial kitchen space to rent.

Kattia began by making tamales. Though New Mexico has its own traditional version, Kattia wanted to introduce Albuquerque to Costa Rican tamales, which use a different kind of masa (cornmeal), often less spicy fillings, and are wrapped in banana leaves rather than corn husks. She began slowly, selling only to friends and to others in the local Costa Rican community, until several of her teachers urged her to expand and begin selling tamales to the public.

In 2015 she and William obtained their first business license and food permit and bought a customized van so they could sell tamales, pastries, and desserts at the Railyard Market on Sunday mornings, in Albuquerque’s Barelas neighborhood. Long lines formed almost immediately and she began to sell out every Sunday. Though markets can be grueling, with pre-dawn load-ins and set-ups, she loved meeting people and watching as they were introduced to Costa Rican flavors. And, through these markets, her reputation grew. She began catering private events, added two more markets to her weekly repertoire and, with the help of one friend from baking school, was making 300 tamales and pastries each week.

In the summer of 2017, she received a call from someone she’d met at one of the markets, who loved her tamales, asking if she’d be interested in opening a restaurant in the El Vado Motel. Originally built in 1937 and located on Route 66, near Albuquerque’s Old Town and the Rio Grande river, The El Vado was being revamped as not only a hotel but as a combination of restaurants, shops, a taproom, and lofts, all surrounding a common patio and fountain. Kattia’s friend, who now managed the El Vado, wanted she and William to sign a lease for one of the soon to be opened restaurant spaces. After discussing it, Kattia and William decided they didn’t feel ready and they decided not to sign.
Over the next six months, the couple they had spent sixteen years assisting needed less help from Kattia and William. They encouraged them to expand their business and to start a restaurant. In 2015, the husband passed away and in January, 2018, on the same day that the wife moved into an assisted care facility, Kattia received another call from her friend at El Vado. There was one spot left and, though smaller than the one they’d originally opted out of, could be perfect for them. Kattia loved the rustic, cool vibe of El Vado’s white stuccoed adobe walls because it reminded her of her grandparents’ inn. By this point Kattia’s confidence had grown because of her success at the markets and she took it as a fortuitous sign that another spot had opened up. She and William decided to take the leap and to officially open Buen Provecho.
The new El Vado opened in May of 2018, with Buen Provecho standing proudly between Zendo coffee and Happy Chickenzz. Kattia tears up remembering the day she first saw the sign hanging above her door and of all of the hard work that had gone into making her dream a reality. Buen Provecho is cozy, welcoming guests with the smell of Costa Rican coffee (roasted specially for the restaurant), tres leches cake, and an assortment of casados

When asked about her menu, Kattia says she spent over a month planning and thinking about it. She knew she wanted to have appetizers, sandwiches, and some larger plates, along with her famous tamales and pastries. Because their space is small, they rent a commercial kitchen where they make all of the tamales and desserts. The meals are all made fresh to order with ingredients bought that day. Although Kattia misses being able to pick mangos and passionfruit in the backyard, she has no trouble finding them, along with other essential ingredients such as coconut, tamarind, and banana leaves, at supermarkets in Albuquerque, especially Ta Lin Market and El Mezquite market.
I visited Buen Provecho twice for this story, once at their stand at the Railyard Holiday Market and once at their El Vado base. At the market, I ordered one of their vegan tamales, filled with mushrooms and topped with sun-dried tomatoes and a tapenade made of capers, green and black olives, roasted red peppers. Wrapped in a banana leaf, it was delicious and easy to eat while strolling through the market. Two women asked me what I was eating and where they could get one as I looked at soaps and candles a few stalls down from Kattia’s. When I visited their restaurant, I ordered the Ropa Vieja casado and Vegetarian Nachos. First of all the meal was beautiful! Garnished with avocado and mango, the plate came with shredded beef in a tomato sauce, perfectly seasoned black beans, picadillo stew (which reminded me of my favorite New Mexican calabacitas), sweet plantains, a salad, rice with a fried egg on top, and a homemade corn tortilla. It was an abnormally warm December day and I sat on the patio, though both the casado and the homemade cheddar cheese sauce drizzled nachos would have gone well with a beer from the El Vado Taproom, had I wanted to eat indoors

Within two weeks of opening Buen Provecho, Kattia and William had lines snaking out the door and realized they would need to hire more help quickly. They now have 8 part time employees, most of whom Kattia met through the baking program at CNM. When asked about plans to expand, she says that the goal is to open another Buen Provecho in 2019 and possibly more beyond that. Because business has been so good, she has had to cut down on markets which she misses but hopes to do one per month when the season returns. Her eleven year old daughter loves to help at the markets and, as Kattia tells me, “is proud of her mom.”
When asked if she thinks the American Dream is possible, she says yes, but it is not easy. She and William have achieved it through hard work, education, saving money, and a periodic leap of faith. She says it has all been worth it because of the happiness she feels by sharing her food and culture with her customers. As it says on the back of her menu, “my customers are like my family and my food is my gift to them.”
Buen Provecho!

The Author: Claire Sandrin lives, writes, and eats in Albuquerque, New Mexico. You can follow her adventures at smagik.com or @smagikstudio on Instagram